"Time is a sort of river of passing events, and strong is its current; no sooner is a thing brought to sight then it is swept by and another takes it's place, and this too will be swept away."
Marcus Aurelius Antoninus
121-180 A.D.
Meditations II

"He once asked him, 'Have you also learned that secret from the river; that there is no such thing as time?'"
Herman Hesse
Siddhartha

"Even the placid appearing river rolls below it's surface. To remove the surface is to expose its forces and what carries it submerged."
Shirley Wyrick
1986

"Time is a river without banks."
Anonymous

"A river moves a river on."
African Saying
Accra/Ghana

A video of the creation process of the sculpture

Shirley Wyrick describes, "The River" in her own words.

A Way of Looking at “The River”

The main body or pattern of this sculptural relief I call “The River” is that of the rivers and creeks of Johnson County (Iowa). Although I scaled up its pattern from a topological map, it is not an exact copy because the Iowa River at this scale would be less than 2” wide.

It seemed to me at the outset of the project that our waterways serve to connect us physically, historically and symbolically. They connect us as well to people outside of our own area.

We are also connected to a “river of thought” which has formed from people thinking and writing about the real nature and the abstract meanings of the river. So while this artwork’s pattern is specific to our geographic area, its meanings are more abstract and as simple or as complex as you and I can make them by thinking about the connections between its overall pattern, its relief imagery and life itself.

Rivers have their own individual characters and our county’s rivers and streams seem to be quiet, gentle and placid most of the time. But I believe that the most placid-appearing river actually roils beneath its surface.

If one could actually remove the surface of the river, its forces and what it carries submerged would be exposed. It was with this abstract idea in mind that I began to develop the imagery on the face of the relief and to overlay other meanings on the river pattern.

The force of the “real” river moves in a corkscrew fashion. That same spiral motion appears also in our concepts of history as a spiral movement, in the eternal braid of our earliest imaginings and in our most recent symbol of life – the double helix of the DNA molecule.

Just as a “real” river, this artwork carries many things and types of materials down its course. Some of their meanings are submerged and waiting for your own interpretations of them.

The objects that seem to be drifting in “The River” are references to such easily recognizable things such as teepees, Voyager II, farms, small towns, ladders, and the Old Capitol dome. There are also things less familiar to us such as doorframes within the landscape, the double helix of the DNA molecule, the eternal braid, the primeval pool and constellations of square (!) stars.

These objects are components of images appearing throughout the course of the river which relate to the work’s major themes of physical, historic and symbolic connection.

For instance, the eagle feather floating downstream over the teepees reflected and dissolving in the river flow suggests the passing of a culture, a point in our history and a thought for the future of our own culture and way of life. At the same time, that image is on an abbreviated time-line starting with the eternal braid and continuing through our current space-exploration by Voyager II.

From yet another point of view, that same feather-teepee image seems related to the image of the tilting barn and outbuildings being pulled down stream by the river. The precarious nature of our current way of life and that of our earlier Native American residents are very related. Yet, in a more concrete interpretation, one might think of the barn falling away from environmental stresses of river erosion. The situation is no less precarious.

Many of these images relate to each other in a time sequence, but not necessarily in a linear one. You may find it rewarding to test a connection between an image at the top and one at the middle. For instance, the two areas of fencing in the work might be thought of symbolically as an example of our creating barriers between people. Yet, in the lower image, four trees have overcome the barrier by interconnecting their branches and the river of the relief has started to pull the barrier away.

Since this is truly an abstract reading of the two images, another person may choose to consider the fencing as a protective device and to read the relationship between the two images in a much different way.

If I could direct you in a way to look at “The River” I’d suggest that you look at the work as a whole and in its parts and then let your feelings and imaginations work to extract enjoyment and meaning from it. There are no right answers, but I feel there is much to think about - I hope you will contemplate this artwork just as you might contemplate a “real” river by returning to it from time to time and allowing your mind and feelings the freedom to experience it.

A postscript: I am very happy to have been given this opportunity to create a work of this magnitude for my own community. My hope is that it will have a timeless quality and that it will stand for some time to come as a record of us now.

Creating this work has been difficult and laborious, but well worth the effort. It is the beginning of my continued exploration of the river. 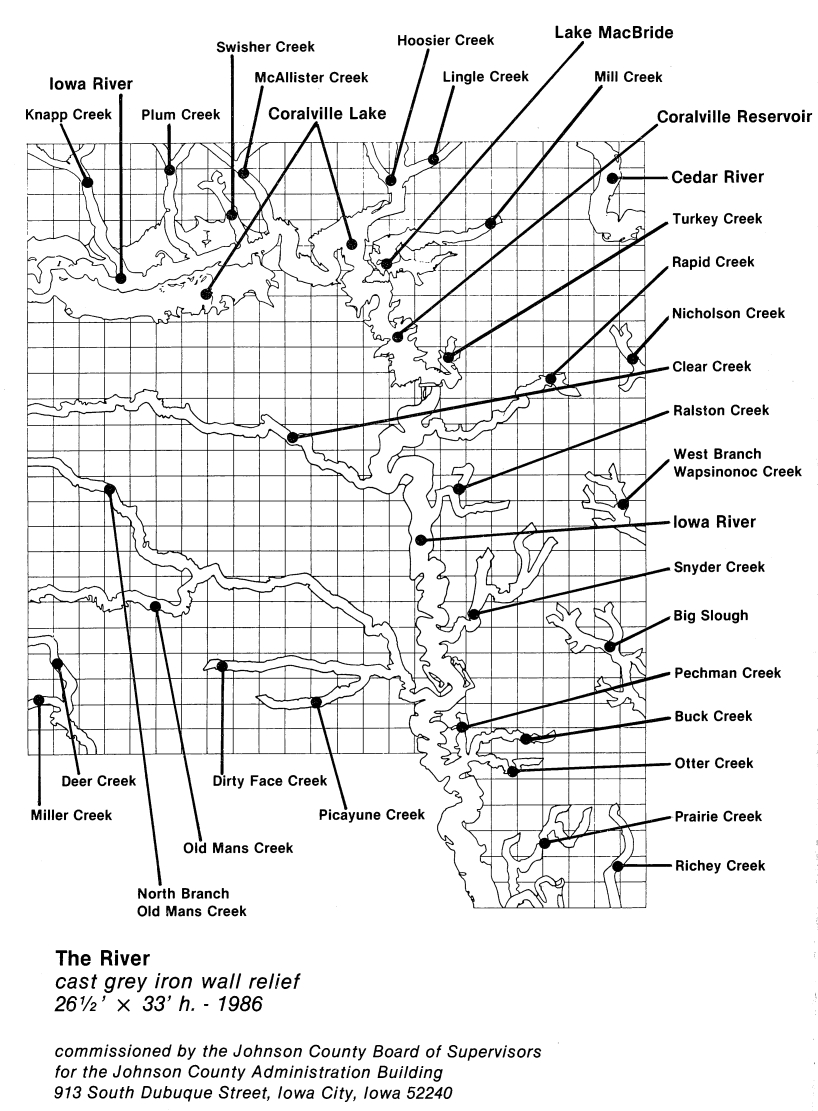