Our milestone summary shows when the County adopted new programs or policies, or completed major projects, to carry out our commitment to sustainability. Since 2009, the County has made internal operations more sustainable, along with making changes that help county residents achieve their green goals. Each year we endeavor also to produce a Fiscal Year Update electronic and printable brochure.

Johnson County, along with Johnson County Conservation, Johnson County Public Health and six cities (Coralville, Iowa City, North Liberty, has teamed up with the Midwest Renewable Energy Association to launch a Solarize program for Johnson County and West Branch residents to learn more about solar energy and add affordable solar to their homes. The residential group buy provided an outright discount along with additional discounts based on the collective kW of the arrays. More than 700 people attended Solar Power Hours, and by early August more than 60 households had committed to adding a total of 425 kW to their homes. Learn more at www.solarizejohnsoncounty.com

The bioretention cell near the Administration Building saw refreshed soil and plantings in 2017. The projected was funded by the internal Sustainability and Energy Reinvestment Fund (see 2014 milestones for fund background). By spring 2018, 12 varieties of flowers and grasses were thriving. The cell slows and filters stormwater—an important function in urban areas where concrete makes many surfaces impervious to water.

The County earned this award from the national SolSmart program for making it faster, easier and more affordable for residents in the unincorporated areas to add solar to homes or businesses.

On June 8, 2017, one week after President Trump withdrew the United State of American from the landmark Paris Climate Agreement, the supervisors passed a resolution to show the County's unwavering support to help fight the climate change and protect Earth from risks of devastating consequences ensure security, prosperity and health. The leaders also agreed to have the County sign on to a statement of commitment at We Are Still In. A twitter handle @counties4climate and #Counties4Climate were used to help spread the word to other counties. 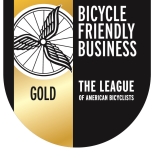 In March 2017, the Downtown Campus--Administration Building, Health and Human Services Building, and the nearly completed Ambulance+Medical Examiner Facility earned gold-status designation from the League of American Bicyclists for such features as accessible bicycle racks, educational events, and Bike to Work Week / One Less Car efforts.

Thanks to upgrades made by the Facilities Department, we were able to earn this large rebate and funnel it into the Sustainability and Energy Reinvestment Fund to support other sustainability and energy-saving projects.

In November 2016, two additional solar arrays went live. An 85 kW ground-mounted array began to provide about 24% of the electrical needs of the Johnson County Administration Building, while a 159 kW roof-top array on the Health and Human Services building started covering about 11% of the electrical need for that combined. The arrays are on a Power Purchase Agreement with Eagle Point Solar. In addition, that same month, two of the Secondary Roads sheds began participating in the Farmers' Electric Community (FEC) Solar Garden. The County purchased 20 modules that are part of the garden--FEC collects the power, puts it on their electrical grid and the County's monthly bills are credited for the retail value of the power.

Certain local non-profit organizations (eligible for County block grants) were able to begin participating in competitive grants program to complete energy efficiencies, resource reduction, or green vehicle projects. Five organizations received grants in this first round, and most of them added LED lights to their offices or facilities. As part of the program, groups completing energy efficiency projects had to have their building undergo an energy audit. A total of $30,000 in grants were awarded.

In November 2015, the Board of Supervisors approved an ordinance amendment to allow for up to 999 birds to be raised, slaughtered and processed annually on agriculturally zoned parcels for sale to household consumers only. The change was made in response to a recommendation by the Johnson County Food Policy Council and research by County staff. Previously, poultry slaughtering/processing was possible only on agriculturally exempt farmland.

In fall 2015, the County added a full-time local foods planning position. In addition, the Planning and Zoning Department was renamed the Planning, Development and Sustainability Department to better reflect its services.

The County had helped create, and is hosting, the Sustainability Working Group (SWG) of Johnson County to share ideas and potentially collaborate on sustainability efforts. Modeled on the Housing Task Force of Joint Entities group, SWG members (primarily staff but including some elected officials) hail from the county, cities, University of Iowa, Kirkwood Community College, and school districts. The group held its first meeting in September 2015 and meets quarterly.

In 2015, the remaining objectives of the two-year goal were completed.

The County entered into Power Purchase Agreements--the first-ever for a county in Iowa--for the installation by Moxie Solar of two solar arrays at the Secondary Roads Campus. Combined the two arrays will provide 86 kW of energy, which will support about 23% of the annual electrical needs for the campus. See the arrays in action online!

A LED upgrade project completed at the County Sheriff Office and Jail will earn a major rebate.

The County is pre-approved to receive an estimate $125,000 for upgrades to the HVAC system in the Administration Building

For the energy draw analysis, it was determined that strong and effective measures were in place for computer equipment, and departments were encouraged not to use mini-fridges and to be mindful of non-essential equipment.